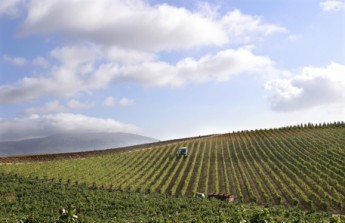 The "Bela Fonte" brand was our representative of the Beiras region

Wine production in the Beira region goes back to the Roman era, as attest the press rooms found in the granite rocks existing in the region.

Measures to protect the wines of this region were taken in 1390 and 1545, during the kingdoms of D. João I and D. João II, on account of their quality and their economic importance.

The region stretches from the Atlantic Ocean onto Spain, bordering the Minho and Douro regions by north, and the Estremadura, Ribatejo and Alentejo regions by south.
The Beira Alta region includes the delimited area DOC "Dão".

Beira Alta is located in north-centre Portugal, in a mountainous recess surrounded by the summits of Caramulo, and Buçaco by south and the imposing Serras da Nave and Estrela by east and south, forming an important barrier to the humid air masses from the coast and the continental winds. Here vines grow at a height of 400-500 metres but may go up to 800 m, on granite soils of poor fertility, and schistose grounds towards south. The climate is temperate, although quite cold and rainy in winter,and very dry and hot in the Summer.

A little further north, soils are of granite origin, with schistose areas, being humic, loose, thin, and fertile. This region is in every way similar to the Vinho Verde region: in the way vines are planted - rimmed in border ranges, leaned against stakes or trees, in trellises high above the ground, as well as in terms of wine characteristics. The white is low volume, rich in malic acid and very fruity, whist the red has ageing capacity. The QWPSR "Lafões" comes from this area.

Further East, bordering the Douro region stands the region demarcated as DOC "Távora-Varosa", known for the high quality of its wines. Soils are mainly formed of schist and granite, with a marked erosion. The climate is temperate and dry, with rigorous winters.

Wine is known to be produced in the region of Beira Litoral since at least the 11th and 12th centuries, according to documents of this time. Wine tradition goes back to the kingdom of D. Afonso Henriques - the first king of Portugal, who authorised vine growing in the region against 25% of the wine produced. This region stretches from the Minho to Alta Estremadura. It is mainly agriculture land, divided into small plots, producing high quality wines, having justified the denomination DOC "Bairrada".

Soils in this region date from different geologic periods, but they are mainly poor (sand, clay and loamy sand). Vine, however, grows mainly on clay and limestone soils. Climate is characterised as "Mediterranean-Atlantic", with rainfall of 900 to 1100 mm. Winters are long and chilly, whereas summers are milder on account of west and north-west winds common in regions closer to the sea.

In the region of Beira Interior (which spreads from Guarda to the south alongside the Spanish border, onto the northern limits of Ribatejo and Alentejo) wine was the main agriculture production for centuries, going back to the Roman occupation. Vine growing, however, witnessed major development in the beginning of the 12th century, incremented by Cistercian friars, especially in Castelo Rodrigo. This is the region of DOC "Beira Interior" which includes the Sub-Regions "Castelo Rodrigo", "Cova da Beira" and "Pinhel".

The whole Beira region is delimited for the production of the Regional wine "Beiras". On account of its distinct characteristics, the region was sub-divided into three sub-regions "Beira Litoral", "Beira Alta" and "Terras de Sicó". It should also be noted the sparkling wines produced in this region with a long tradition, namely QSWPSR "Bairrada", "Távora-Varosa", "Dão" and "Beira Interior".