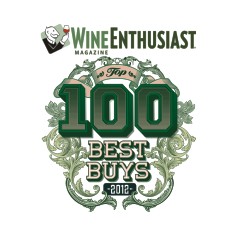 The wine VEGA Douro red wine 2009 from DFJ VINHOS won in the Wine Enthusiast magazine the award of the best BEST BUY WINE OF THE YEAR 2012.

The Wine Enthusiast is one of the most important wine magazines in the world and every year does the list of the 100 Best Buy wines selling in the USA.
In 2012 the experts at Wine Enthusiast tasted 17,000 wines, giving the designation "Best Buy" to only 1134. Then they made the list of the 100 best, and the best of all was the VEGA Douro red 2009 from DFJ Vinhos. For the first time a Portuguese wine appears at the top of this list.
This year DFJ Vinhos won 29 Best Buys in this magazine. Last year the 9th Best Buy wine of the year was also from DFJ’s, the GRAND'ARTE Alvarinho 2010 (the first Portuguese white wine in the Top 10). Over the past five years, DFJ Vinhos always seen their wines on the list of the top 100 Best Buys.
The DFJ Vinhos team is proud to once again see their work recognized, and now with one of the most important trophies in the wine world. This is also a prize for our representatives and friends, always asking DFJ the best quality / price ratio of our wines.
Drink DFJ’s, in moderation!

Our exclusive ranking of the year's best values.
BY WINE ENTHUSIAST EDITORS
“Our tasting experts reviewed more than 17,000 wines over the past 12 months, awarding the Best Buy designation to only 1,134 (roughly 6.7%). We whittled the list down from there, ultimately selecting wines that showcase the best relationship between score and price while also assessing other factors like availability and buzz. We also consider the overall balance of the list, striving to provide a wide range of different styles, varieties and origins for all palates and preferences.”

DFJ VINHOS
DFJ Vinhos was born in 1998 and its owner Mr. José Neiva Correia was also its chief winemaker. Since the foundation DFJ its export-oriented (now 95%) to 45 countries. It controls over 400 ha of single estates, producing an average of 6 million bottles, with a group of 28 people. Recognized in Portugal and abroad we highlight:


VEGA TASTING NOTES
DFJ Vinhos 2009 Vega (Douro). Smooth and wood aged, this has a polished texture. Fruit flavors of blueberry and red cherry combine with the rounded tannins and a spice note to give a rich feel. Full yet elegant, age this for the next two years. Dionysos Imports Inc. - R.V. – 90 / $ 9