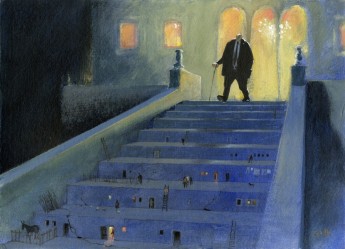 We reproduced the press-release of the organization here:
“Italian cartoonist wins XIV PortoCartoon
Alessandro Gatto, of Italy, was the winner of the Great Award of the XIV PortoCartoon-World Festival, organized for the National Museum of the Press, and subordinate to the theme "Rich, poor, angry."
The second award was attributed to Felipe Galindo, Mexican to live in the USA, in the category Free, and the third awards was divided by Turcios, of Colombia, and Valery Doroshenko, of Ukraine.

The opportunity of the theme and the high quality of the participants' great part was underlined by the Jury's members.
In appreciation they were about two thousand works, of hundreds of artists, originating from of all the continents. The Iran is it the country with more participants (66) and works: 255. It is followed Brazil, China, Portugal and Romania.

With this participation, Portocartoon cements its place in the podium of the international contests of humor and it reinforces the pertinence of the classification of Porto with the 'capital of the cartoon', attributed in 2008.

The international Jury of XIV PortoCartoon was presided by Georges Wolinski (France) and it still integrated: Peter Nieuwendijk, President-general of Feco (Holland); Xaquín Marín, founder of Museo of Humor of Fene (Spain); Luís Mendonça, Representative of University of Fine arts of Porto and Luís Humberto Marcos, director of PortoCartoon and of the National Museum of the Press.

The winners of XIV PortoCartoon will receive the trophies and awards during the opening ceremony of the exhibition that will elapse in the facilities of the National Museum of the Press, to June 23, the day of St. John’s festivities in Oporto town.

Several hundreds of thousands of visitors already saw the thirteen editions of PortoCartoon accomplished in the facilities of the National Museum of the Press, and in the different cities through where passed the exhibitions: Argentina, Bolivia, Brazil, France, Spain and Mexico.