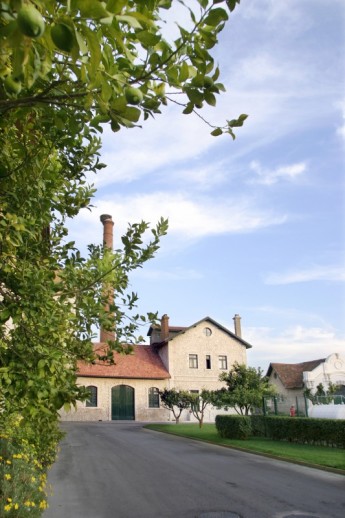 In 2009 the vine region of Ribatejo changes is denomination name to Tejo. The DFJ headquerters in the Quinta da Fonte Bela are located in this region.

Accordingly with the will of the producers of the region and with the published ministerial law 445/2009, from 27th April, it was ruled the geographical indication "Tejo", for the production of white, red and semi-sparkling wines.
With this new geographical designation it is expected a new visibility and dynamic to the wines produced in the region that with the qualitative increase has being recognised at an national and international level.

Situated in the centre of Portugal, with a large used agricultural surface (SAU), of 258.000 ha, around 7% of the national and with a forestry surface of 160.000 ha, about 17% of the national,the region has fineable natural conditions for the development of the agricultural, forestry and animal breading activities.

The ancient Tejo vine and wine history loses in times, as the existence of vineyards in the region goes back to ancient times before the existence of Portugal as a nation, as it can be proved by the yellowed papyri manuscripts from the roman period who might be the main introducers of the vine culture in this region.
There are several references to the vines and wines from the Tejo region in documents produced by the Portuguese kings as D. Afonso Henriques, D. Sancho II and D. Fernando.
Also Fernão Lopes refers "the large cargoes of wines" saying that "the average annual export rate has been carried in 400 to 500 ships and in one year it has achieved to 12.000 tunnels of wine".
But the apogee of the commerce of these wines happened mainly in the end of the second half of the XIII century, as just for England, the figure has reached around 30.000 barrels.

The vine has had a predominant role in the colonization of the region. Between 1900 and 1960, the population has increased around 61%; but in the councils with major vine and wine incidence, as Almeirim, Alpiarça, Cartaxo, Chamusca, Coruche,Rio Maior, Salvaterra de Magos and Santarém, the population increase on the considered period was around 175%, as only in Almeirim this augmentation represented around 228%.

The main orographic accident is the Serra de Aires and Candeeiros, delimitating the so called "Medium Tejo" and "Lezíria do Tejo" and in hydrographical terms, the river Tejo continues to regulate (sometimes for the good others for the bad) the agricultural activities in the region, due to its dimension and "regular" irregularity (the full's).
Still, the vine is generally the culture less affected by the full's that occur, less and less frequently, due to the management of the streams made by the different barrages.

There are in the Region, three distinct types of landscapes, known as "CAMPO", "BAIRRO" and "CHARNECA".

The "CAMPO", with their large plains adjacent to the river Tejo is also known as the "Lezíria do Tejo" and is subjected to periodical floods that causes some troubles but are also responsible for the high levels of fertility those alluvial soils have, and it is mainly the zone of white wines,with the variety Fernão-Pires as a queen.

The "BAIRRO", situated between the Tejo valley and the counters of the massive of Porto de Mós, Candeeiros and Montejunto, with sandstone, limestone and clay soils in soft waves, is the ideal zone for the red varieties such as the Castelão and Trincadeira.

The "CHARNECA", at the south of the "CAMPO", in the left bank of the river Tejo, with sandy and medium fertile soils, presents on one side, crops below the media of the region but on the other hand, an harmonization both for the white and red wines.

The plantations are aligned. The traditional conduction system is the "low vine" however the introduction of the mechanical harvest has introduced some changes, such as the size of the vineyard.

The climate of this region is southern-Mediterranean and temperate, on account of the proximity of the river Tejo with an annual rainfall around 500-600 mm.