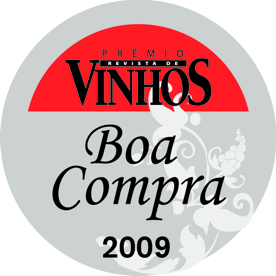 Here’s the appreciation of the CASA DO LAGO white 2008 who won BEST BUY (BOA COMPRA):

Nice aroma, with mixture of tropical fruits softened by subtle notes of flawers and citrine fruits. In the mouth it has presence and volume, light spicy that cheers in the end of tasting, good acidity that gives it freshness. An appellative and vigorous white, cheerful. 15/ 20 Pts