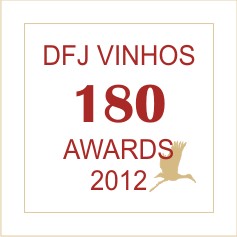 We are very proud as this it’s the best recognition of the work of our team, always searching for the best quality and price of our wines.
In 2012 DFJ won 178 awards, including 20 gold medals, 41 silver medals and 3 trophies.

We highlight here the most important awards during 2012.

For the first time a Portuguese wine appears at the top of this list.

DFJ VINHOS the PORTUGAL WINERY OF THE YEAR 2012
The DFJ Vinhos team was very proud after received in the NEW YORK INTERNATIONAL WINE COMPETITION 2012 the award:
PORTUGAL WINERY OF THE YEAR
The NYIWC is the only major international wine competition to be judged solely by trade buyers. Each wine is judged by its category and retail price. All participating judges have purchasing power through their stores, restaurants, distribution networks, which results in their ability to have a direct impact on brand sales.
MORE INFO at: http://en.dfjvinhos.com/v/dfj_vinhos_portugal


DFJ VINHOS won 20 gold medals in 2012
Was fantastic to get in several wine contests around the world 20 gold medals. It was a global recognition of the quality of our wines.
MORE INFO at: http://en.dfjvinhos.com/v/2012_list_of_awards


DFJ VINHOS
DFJ Vinhos was born in 1998 and its owner Mr. José Neiva Correia was also its chief winemaker. Since the foundation DFJ its export-oriented (now 95%) to 45 countries. It controls over 400 ha of single estates, producing an average of 6 million bottles, with a group of 28 people. Recognized in Portugal and abroad we highlight:
• Portuguese wine company of the year 2004 / Revista de Vinhos Magazine award.
• Twice winner of the trophy RED WINE OF THE YEAR in the International Wine Challenge - London.