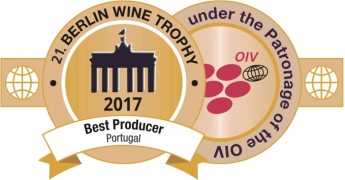 DFJ Vinhos, one of the most innovative and recognized Portuguese wine producers, received the trophy “BEST PRODUCER PORTUGAL - Still Wine" in the Berliner Wein Thophy 2017.

In addition DFJ VINHOS also received one double-gold medal, five gold and two silver with its wines listed below.

This German competition is one of the most respected in the world, being of enormous importance to the recognition of a wine producer company and even more to those who want to export more and better.

Mr. José Neiva Correia, the owner and winemaker-chief of DFJ Vinhos remarked "These awards are a recognition of the work we have done recognizing the commitment and demand that we have in the production of our wines”.

DFJ Vinhos is a family-owned company founded in 1998.

It belongs to Mr. José Neiva Correia, who is the winemaker- chief, producing wines since the 1974 harvest, having been awarded "Portugal’s Mister Wine 2013" by Revista de Vinhos. Mr. Neiva Correia it’s recognized internationally as one of the great responsible for the innovation and modernity of the Portuguese wines.

DFJ VINHOS controls 800 ha of vineyards in partnerships with several single estate producers. The most important partnership is with the Company RUI ABREU CORRREIA E HERDS (estates of the Mr. Neiva Correia family), 200 ha in the wine region of Lisbon.

DFJ VINHOS does vinification in 2 winemaking centers, reaching sales an annual average of 6 million bottles, more than 98% exported to more than 50 countries, with a staff of 34 people.

DFJ VINHOS is dedicated to continuous research and development, possessing the highest degree of quality certification by the BRC standard since 2009.

DFJ VINHOS is one of the most internationally awarded wine companies.

Since 2006 DFJ wines reach 9 times the TOP BEST BUY OF THE YEAR list of Wine Enthusiast.

VIDEOS
To know more about us here’s 4 videos: 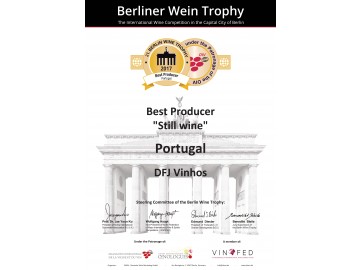